The marginalisation of the most vulnerable is damaging for the entire community from all perspectives. Everyone can actually make their own contribution to developing the local area and the community in which they live, but they need support and a solid and inclusive social network.

On the strength of this belief, we support many projects targeted at social inclusion in different areas.

Sport is a powerful way of bringing people together socially and through our projects we support its strong values: loyalty, sense of belonging, determination and team work.

INSIEME is a three-year project created in collaboration with CUS Milano Rugby and the Municipality of Milan to promote sport for young people from socially disadvantaged backgrounds and at risk of exclusion in several outer-Milan districts. The initiative, launched in 2017 by the Quarto Oggiaro zone, was subsequently extended to via Padova and Baggio. In addition to the teaching of the sporting disciplines of rugby, volleyball and track and field, we also provide a psychologist who offers support for the most difficult family situations. Group volunteers also took part activities in the field. The Group has also financed the refurbishment of the most run down sports facilities in the areas involved. During the lockdown period, despite the training sessions being suspended some volunteers from CUS Milano were out distributing food parcels to people in difficulty, also thanks to the co-operation of Mediobanca staff members. To help families in caring for their children during the summer period, CUS Milano took part in the Summer School run by the Milan municipal council, providing recreational and educational activities. Given the success of the initiative, we have renewed our support for the 2020-23 period as well.

In September 2021 a new rugby pitch was inaugurated at the San Giovanni Bosco parish oratory, in the Baggio district of Milan.
The INSIEME project has seen more than 1,000 young people from the suburbs of Milan involved since 2017.

In 2016, we teamed up with the Italian Paralympic Committee (CIP) for the #Oltre (“Beyond”) project, aimed at supporting and spreading the values of Paralympic sport as a way to encourage social integration, and to celebrate a culture of achievement and open and fair play.

This year too we decided to bring the values of sport to the challenging environment of prison, running our multi-sport camp at the “Cesare Beccaria” young offenders’ institution for the fourth year. The camp offers the detainees an opportunity to take part in a variety of sports for a week, in a competitive environment which instills respect for the rules and fair play. We also carried out maintenance and reports to the sports facilities as part of our involvement. Different volunteers take part in the activities each year, working together with the staff.

CMB Monaco  including with the involvement of its own staff, took part in the No Finish Line marathon for charity to support the Children & Future association which helps to protect children and ensure that their rights are respected. CMB also supports the Be Safe charity which combats drunk driving.

We promote and support projects that address difficult family and personal situations, by attempting to reintegrate young people at risk of truancy and social exclusion into the community and job networks.

The Woodworking Academy represents, for us at Mediobanca, a stand-out project in the field of social inclusion. Set up on the back of a three-year partnership of Mediobanca and CheBanca!with Cometa Foundation, the Academy is an artisan start-up which focusses heavily on social inclusion and offers job opportunities to young people from difficult social, economic and personal backgrounds. The undertaking, now in its third year of activity, aims to become a sustainable and independent business entity which produces services and products of excellence in furniture and interior design and, at the same time, aims to help young people and marginalised young people in their future personal and professional growth. The project has been confirmed for the coming year. 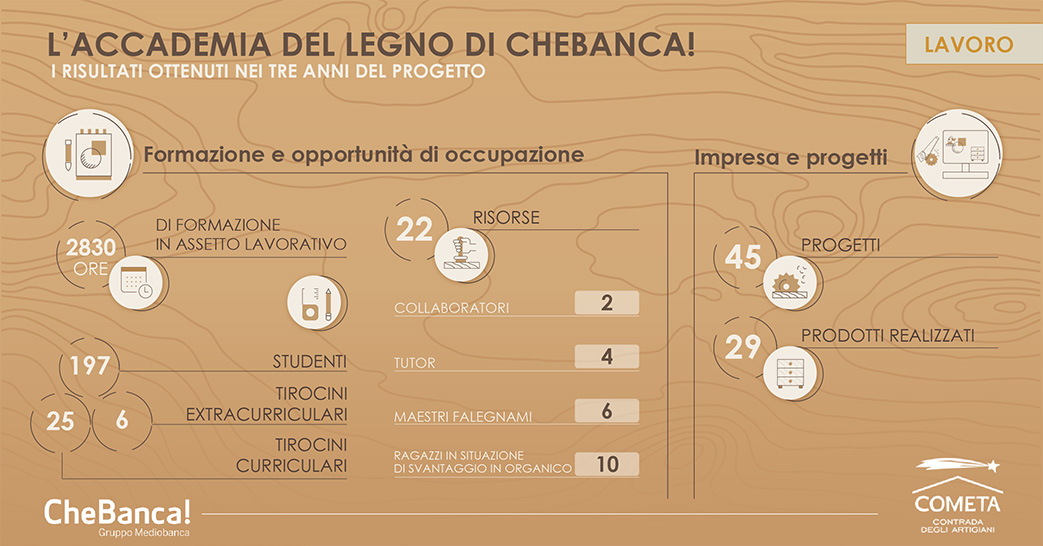 The Mediobanca Group and Mission Bambini have joined forces for the second year running, working together to promote inclusive education for over 700 children and young people in some 40 elementary and middle schools.

The project involves redeveloping the schools’ outside areas from an educational standpoint by creating a sensory garden, to be developed as part of a company volunteering project promoted by the Mediobanca Group.

The project also includes providing psychological and emotional support for the children through Mission Bambini areas and enhancing the schools’ computer equipment.

This year too, a thousand trees will be planted with the help of volunteers from the Mediobanca Group.

“Look to the Future” is the project launched last year which revolves around the issue of education, which embraces enhancement of digital provision, improvements to the upkeep of school buildings including through company volunteering, and education in the area of sustainable development. The beneficiaries of this scheme are more than 300 children and young people in twelve elementary and middle school classes at two schools in disadvantaged areas in and around Milan.

Enhancement of the schools’ digital provision has been complemented by days of company volunteering, when members of Mediobanca’s staff have helped out in some of the activities involved in refurbishing school premises in Milan, including the outside areas.

An environmental education scheme called “PiantaLÀ” has also been launched in the schools involved in the scheme, as part of which workshops were run for the pupils ending in November, when the pupils themselves, together with volunteers from Mediobanca, took part in planting a thousand trees.

This initiative, promoted together with l’Arte di vivere con Lentezza Onlus and in collaboration with Kasa dei Libri, involves the world of prisons with the goal of promoting their social inclusion through reading. Major Italian writers take part in the project, who answer questions from prisoners throughout a series of meetings organised in the prisons signed up to the programme. The project started to also involve group volunteers from the second edition. The project was scheduled to run for the third time in the spring of 2020, but owing to Covid-19 has been postponed, seeing as the writers and volunteers were not able to enter the prisons at the time.

Through Mediobanca UK, we launched a partnership with the charity that offers young people from disadvantaged backgrounds tailored career coaching meetings to help get them into the world of work, also thanks to the direct intervention of employees in the role of voluntary trainers.

Health is an inalienable human right. Assistance for the sick is not only important from a medical point of view, but from a psychological perspective. For this reason, we support numerous charities active in the Milan area in the health and socio-assistance domain.

VIDAS provides complete healthcare and assistance free of charge to patients suffering with terminal cancer, both at home and in the Casa Vidas hospice in Milan. We pledged our contribution to the association the Casa Sollievo Bimbi which provides care and relief for children and young people at advanced stages of incurable diseases and their families.

Find out about the association

RAM Active Investments, through the RAM Active Philanthropy Foundation, backs this organisation based in South Africa which supports initiatives for the care of orphans as a result of their parents dying from AIDS.

RAM Active Investments supports this association which seeks to improve the health of the rural populations in India, Cambodia and Madagascar by offering them sustainable and independent access to safe drinking water.

Find out about the association

RAM Active Investments supports this Swiss organisation which, as part of a “specialised care” programme, welcomes children with diseases and malformations who require specialised operations and advanced technologies not available in their country of origin.

IT’S TO SAVE ENERGY!